Traverse through the Great Himalayan Range and appreciate the sheer geographic diversity; from the verdant, forested valleys and tropical jungles of Arunachal and the flowering meadows carpeted with rare orchids, to the rugged terrain of the Trans Himalaya that extends to the Tibetan plateau. The is nothing more challenging anywhere in the world as the mighty Himalayas. They stand aloft, stirring the adventure spirit, challenging to conquer the heights.


The Himalayan system, about 2,400 kilometers in length and varying in width from 240 to 330 kilometers, is made up of three parallel ranges--the Greater Himalayas, the Lesser Himalayas, and the Outer Himalayas--sometimes collectively called the Great Himalayan Range. While intimidating mountains like Everest and 2K tend to dominate our perceptions of the region, the Himalayas are rich in biodiversity. Climates range from tropical at the base of the mountains to perennial snow and ice at the highest elevations. 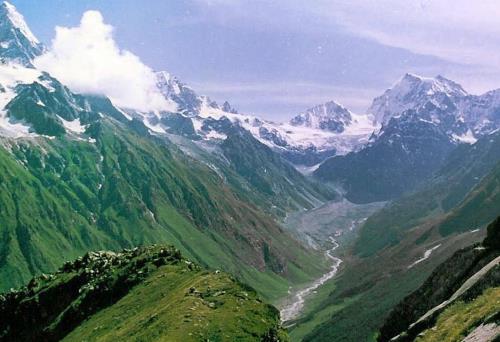 The colossal Himalayan Mountains form a border between the Mt. EverestIndian subcontinent and the rest of Asia. The Indian Himalaya provide a stark contrast to the dusty plains of the north and the hothouse of the tropical south. In this region of hill stations, fertile valleys, lunar landscapes and rarefied mountain air, local inhabitants have carved out a spartan existence in the pockets of habitable terrain. 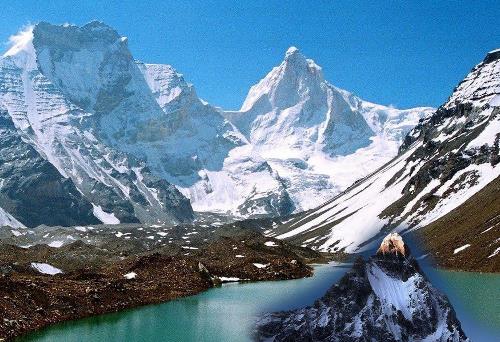 This marks the crossroads of Asia's three main cultures: the Kashmir Himalaya is the cultural boundary of Islam; the foothills of Jammu, Himachal Pradesh and Uttar Pradesh define the northern limits of Hinduism; while Ladakh is the south-western spur of Buddhism. They were formed geologically as a result of the collision of the Indian subcontinent with Asia. The Himalayas are the world’s tallest mountains, towering more than five miles above sea level.

The trekking season, from the traditional late spring to summer, covers virtually the whole year including winter at lower attitudes. Professionally operated ground transportation, trained staff and good quality equipment are available in Delhi with tour operators and outfitters specialising in trekking tour to the Himalaya.

Due to the vastness of the terrain, Ladakh with its high altitudes and sparse population, is considered the state's most difficult trekking region. With the lowest altitude around 11,000 feet, in some areas just breathing can be a problem, and acclimatization prior to the trek is essential. Himalaya means “home of snow” because the tallest peaks of the Himalayas are always capped with snow.

Himalayas of India have a unique distinction of being the youngest mountain ranges on earth, coming into existence with the geographically recent joining of the subcontinent of India to the Asian mainland. Also, Himalayas are one of a few 'living' mountains on earth and hence trekking in Himalayas has a rejuvenating effect on the total mind-body potential.

The Himalayan peaks have always attracted mountaineers. Nanda Devi and Kanchenjunga are the two of the highest peaks, which offer very a challenging environment for mountaineers from far corners of the world. Some of the biggest challenges for the intrepid climbers are in the Garwal Himalayas, the Zanskar range in Jammu & Kashmir, Kulu & Lahaul in Himachal Pradesh. There are numerous opportunity for the one with a quest for adventure spread all over North India.

Himalayas form a distinct geographical divide that separates the Indian subcontinent from Central Asia, the Himalayas extend from west to east in a massive arc for about 2500 kilometers (1550 miles). Covering an astounding area of 612,021 sq. km, the vast mountain chain passes through the Indian States of Jammu and Kashmir, Himachal Pradesh, Uttar Pradesh, Sikkim and the Himalayan kingdoms of Nepal and Bhutan . The Tibetan Plateau - the roof of the world - forms the borthern boundary of this magnificent mountain system while lower extensions of the Himalayas branch off from eastern and western frontiers of these mountains. Himalayas are rugged foothills are carved into deep gorges and ravines by innumerable streams and the descent of the five rivers namley the Sutlej, Beas, Ravi, Chenab and Jhelum. The Kullu Valley in Himachal Pradesh and the Vale of Kashmir are both Himalayan valleys, as is the Kathmandu Valley in Nepal. The final southern range of the Himalayas, the Shiwalik Hills, ends abruptly in the great northern plains of India. The season for trekking in Himalaya is rather short due to climatic conditions. The passes are difficult to trek, as they remain covered with snow during most of the year. June to mid September are the months when trekking is possible in most of the trekking regions in India.

A great variety of tribes and cultures have developed in the Indian Himalayas. This has been aided by the fact that the mountain people have mostly lived in valleys isolated from the rest of the world, with entry and exit points lying over high mountain passes. As a result, they have been able to develop their own distinct cultures and traditions.

Offering some of the finest trekking and mountaineering challenges, the Indian Himalayas are a hot spot among climbers and trekkers throughout the world. Since most of India's northern boundary lies in these mountains, many areas close to the international borders have been declared off-limits for tourists, especially for foreigners. Territorial disputes and trouble caused by militants are other reasons why access to some parts of the Indian Himalayas is restricted.

However, those parts that are accessible offer some spectacular terrain: high mountain ranges; deep valleys; a fantastic variety of vegetation ranging from dense tropical forests of the lower foothills to alpine and sub-alpine vegetation in the higher reaches and from the rain forests of the east to the desert vegetation in the barren Trans Himalayas. For the visitors to the region, there are fantastic trekking and mountaineering opportunities, some breathtaking journeys along some of the highest roads in the world, and a glimpse of the life that thrives in the heart of the highest mountain range on earth.

The Himalayan Alpine climate varies according to the elevation. It gets colder as the elevation increases and gets wetter as the elevation drops. As a result the temparture and climatic changes in the Himalayan regions change very quickly. All of a sudden there can be occurances of monsoons, floods, high winds, snowstorms and other types of precipitation, which makes the climate over here quiet an unpredictable and dangerous one.

The regions such as Ladakh & Zanskar that lie to the North of the main Himalayan range and escape the full impact of the monsoon. Humidity is always low in these regions, and receives only a few centimeters of rainfall a year. The weather here gets warmer only in late April or early May.

In June, daytime temperatures frequently rise to the mid 20s(C), the snow on the passes melts and most of the treks can be undertaken from then on until the middle of October. Heavy rainstorms can occasionally be experienced in July and August. By September the conditions are ideal, and they normally remain so until late October even though night time temperatures may fall below freezing. By November, the early winter snows fall on the passes closest to the Himalayas.

The Lesser Himalayas, located in northwestern India in the states of Himachal Pradesh and Uttar Pradesh, in north-central India in the state of Sikkim, and in northeastern India in the state of Arunachal Pradesh, range from 1,500 to 5,000 meters in height. Located in the Lesser Himalayas are the hill stations of Shimla (Simla) and Darjiling (Darjeeling). During the colonial period, these and other hill stations were used by the British as summer retreats to escape the intense heat of the plains. It is in this transitional vegetation zone that the contrasts between the bare southern slopes and the forested northern slopes become most noticeable.

The Outer or Southern Himalayas, averaging 900 to 1,200 meters in elevation, lie between the Lesser Himalayas and the Indo-Gangetic Plain. In Himachal Pradesh and Uttar Pradesh, this southernmost range is often referred to as the Siwalik Hills. It is possible to identify a fourth, and northernmost range, known as the Trans-Himalaya.

The area of northeastern India adjacent to Burma and Bangladesh consists of numerous hill tracts, averaging between 1,000 and 2,000 meters in elevation, that are not associated with the eastern part of the Himalayas in Arunachal Pradesh. The Naga Hills, rising to heights of more than 3,000 meters, form the watershed between India and Burma. The Mizo Hills are the southern part of the northeastern ranges in India. The Garo, Khasi, and Jaintia hills are centered in the state of Meghalaya and, isolated from the northeastern ranges, divide the Assam Valley from Bangladesh to the south and west.